In my years of teaching, coaching basketball, and being involved in the lives of teens I learned one thing that dwarfs everything else I learned. Boys and young men need dads. Most importantly, they need to know that their dad is “there.”

Being “there” doesn’t mean you have to be at every game, every practice, every up and down, every event. However, being “there” means that they can depend on you. That they know you care. That you love spending time with them. That, when the time comes, you are willing to drop everything just to see or be with them.

First, some staggering and sobering statistics. Most of these statistics pertain to single-parent households where the dad is not present in the child’s life.

END_OF_DOCUMENT_TOKEN_TO_BE_REPLACED 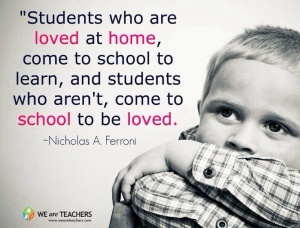 My Tweets
Follow The Quotable WELS Teacher on WordPress.com